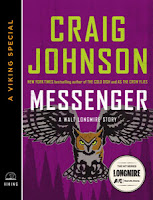 First Sentence:  It was one of those late summer days that sometimes showed up in early October after a killing front—warm, dry, and hazy; Indian summer.

Sheriff Walt Longmire, best friend Henry Standing Bear, and undersheriff Victoria Moretti are returning from a day of fishing.  A distressed call from park ranger Chuck Coon leads them to find Coon and a tourist trapped on top of a campground Porta Potty, having been driven there by a large black bear sow and her cubs.  Inside, also trapped, is a special creature who may be a special Messenger for Walt.

It takes a special author whose short stories equal the quality of his full-length novels.  Johnson is just such an author.  All of the elements of an excellent book are here.  He draws you in from the first sentence with evocative descriptions and establishes a sense of place that makes you part of the story.

Johnson has created such wonderful characters in Walt, Henry and Victoria (Vic).  Even in this short-story format and had you not read a previous book, they are fully developed; you know who they are and their relationships to one another.  Each character’s personality, as well as the affection between them, is very evident.

One of Johnson’s greatest strengths is dialogue.  The spoken dialogue is crisp, very natural, and further establishes each character.   The internal narrative places us in Walt’s head and allows us to see the story from his perspective.  There is excellent balance between the narrative and the dialogue.  Both also allow us to enjoy Johnson’s humor.

Learning about the beliefs of the Cheyenne is fascinating.  Even more, it takes what could have been a simple and delightful story, and gives it depth and import on Walt’s life.  It gives us, the reader, a bit of education, and greater respect and sense of wonder for one of nature’s glorious creatures.

“Messenger” is a wonderfully original story with humor, mysticism and friendship.  While you may wish it had been longer, you’ll also appreciate that it is perfect, just as it is.

Two significant benefits of buying this e-book are that a portion of the proceeds goes to the Teton Raptor Center in Jackson, Wyoming, and that it also includes the first chapter of Johnson’s next book, “A Serpent’s Tooth”.