All the Devils are Here by Louise Penny 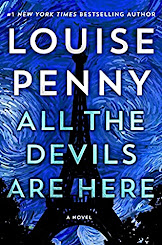 Chief Inspector Armand Gamache and his wife Raine-Marie have come from Canada to Paris for the birth of a new grandchild.   After a celebratory dinner with their two children, spouses, and Armand’s billionaire godfather, Stephen Horowitz, Stephen is deliberately struck by a vehicle and now lies in a coma.  A grim discovery at his apartment prompts an investigation and the uncovering of family secrets leaving Armand to determine just who can be trusted.

Paris is not a city about which one can be objective.  It is a city that enthralls from the moment one arrives and, even if one never has the chance to return, it lives within one forever.  Penny has captured perfectly that sense of having found the city of one's soul and portrays it perfectly.  Even the hardcover book’s glorious end sheets, designed by MaryAnna Coleman, draw one into the beauty of Paris. Opening with lines from Shakespeare's "Tempest" is the perfect balance to the City of Light with a history of darkness.

Although not an issue for new readers, series readers may have a sense of being a stranger in a strange land having the story set outside the usual environs of Canada and Three Pines.  This was an effective decision as it is echoed by Gamache having the same sense of not knowing who to believe, who to trust.  It illustrates the duplicity of people and is effective in heightening the suspense and tension. The connections made back to Three Pines and the Sûreté du Québec are nicely done.

The mystery is well-plotted as it grows upon itself and is delightfully complex taking one down unexpected roads.  Yet, more than a mystery, this is a story of relationships, and with that comes wisdom.

Penny employs her characters wisely.  Involving family members as part of an investigation can be risky.   However, in this case, no one is superfluous; neither are any of their roles forced or out of character.  Each has skills that contribute, and each is humanly imperfect with weaknesses and foibles.  In other words, they are real.  Even the use of an unseen, yet critical, character is wonderfully done. The theme of abandonment, which appears in various ways through Penny’s books, is heartfelt and recognizable to so many.

Penny's ability to place the reader within the story is second to none.  Sitting in the hospital, awaiting news of a loved one, you feel, hear, and smell the starkness and desperation of those who are there, and the unwillingness to give up hope.  Her use of dialogue is evocative.  The banter between Jean-Guy and Armand is always something one anticipates and enjoys, but this was lovely as well--"Please, Dad," Daniel now said. "Tell me you were a commando." "Better." His father leaned closer and dropping his voice further. "I taught commandos."

When reading Penny, there are always lines that make one stop and consider, small lessons to be learned--"It had taken Beauvoir years to see the power of pausing. And of patience. Of taking a breath to consider all options, all angles, and not simply acting on the most obvious."  She teaches one the value of seeing not only what is there, but what is not; what is real, and what is facade, and that--"People believe what they want to believe.  Beginning with their own lies."  "Hell is the truth seen too late," said Reine-Marie."

“All the Devils are Here” is Penny’s best book to date.  It is complex, suspenseful, and emotional with a small touch of the paranormal.  It has a cracking good, twisty plot--you don't see where it is going--and an excellent ending. Most of all, it demonstrates Penny’s continuing growth as an author and, I suspect, as a person. And isn’t that the goal of us all?