Reading to World Cup to Crochet 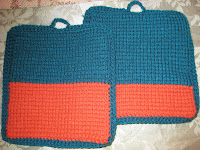 My normal average monthly reading ranges from 10-20 books per month. But then came the World Cup. Normally, I don't follow any sports, but World Cup always makes me a fan. That doesn't mean I know the rules, except vaguely, but I love the idea of it being a game at anyone--not me--could play, from the sandlot to the stadium, and that it truly is "the world's game." Even though the US is out of the competition--don't get me started on the referee's calls--I still follow it and choose my favorite teams game-by-game.

The downside of all this four-year fandom is that my reading has taken a serious hit. I've read fewer books than normal this month--okay, so many I did get ten books read--and nothing really made me think "Wow, what a great book." I haven't even written up my normal reviews yet.

The upside is that because I was influences by Grandmothers who believed that "idle hands and an idle mind are the Devil's playground," I have rediscovered crochet. Crochet was my craft of choice from the time I was 16 until I discovered needlepoint when I was in my early 30s. Due to neck/back and eye issues, I've not been able to do needlepoint for awhile now. But I've not pickup up my crochet hooks, bought some yarn and have gone to town.

I started easy with double-thickness potholders and made two pair for myself, am nearly finished with two pair for one friend and than will do two pair each for another friend and the mother of her boyfriend. Because joy of craft sometimes overtake rational budgetary concerns, I'm also making an 8' vertically-stripped scarf from baby alpaca yarn.

Once World Cup is over, I hope my reading will return to more normal levels, but I think crochet may fight for it's place as well.
Posted by LJ Roberts at 8:59 AM 3 comments: