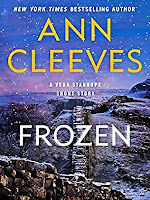 First Sentence:  As it often did since he'd married a cop, murder interrupted more pleasant activities.

Lt. Eve Dallas, by her husband, Roarke, goes to the scene of a murdered woman.  While on-site, Roarke sees a man he knew from his past in Ireland. Lorcan Cobbe, a contract killer, claims he is Roarke's father's actual and first son. He hates Roarke enough to kill him, and everyone he loves.  Eve is certain the dead woman's husband hired Cobbe to perform the hit and commits to proving it first, then stopping Cobbe, as more bodies turn up.

There are times when one wants an entertaining, captivating read.  With her 51st book in the Eve Dallas series, Robb succeeds in creating exactly that.  Yes, the plots are somewhat predictable, but the world Robb has created is visual, and the characters are ones about whom readers care.

What is remarkable is that the series began in 1995 with the first book set in 2058 and Eve being 30 years old, releasing two Dallas books/year, plus the occasional novella.  Now the series is in 2061; three years and 51+/- cases later, bringing Eve's clearance rate to ~17 cases per year, or once every three weeks.  What police department wouldn't love that?

Robb has a deft hand when it comes to dialogue, even creating slang that fits for the near-future time period.  How clever to use an expression known to readers in the present but would be anachronistic to the period.  There are some great lines, and her wry humor is always a pleasure.  A discussion on the subtle differences between colors leads to an internal observation—"Peabody turned a little green—perhaps celadon—and turned her head to stare hard at the wall." Robb carries thoughts through from one scene to another with great deliberateness and ease.

One learns more about Roarke's childhood and one must respect that Robb, even this far into the series, still has new information to impart. One small irritant is Roark's references to Eve being "his," making her seem a possession. However, this is mitigated by the realization that Eve claims Roarke in the same manner and showing it is a manifestation of their commitment of care and protection, and not possessiveness, even including those around them.  Yes, the scenes of lovemaking are hot, but they are more about emotion than sex.

Eve is not perfect which makes her more real.  She has areas of discomfort and gaps in her knowledge for anything beyond her job or her city—"They look like cops…I need them to look like farmers. Irish farmers," Eve added. "Who are out there doing farm stuff."

There is an urgency and intensity to the investigation which gives the sense of needing to run to keep up. The action scenes are visceral, tense, exciting, and filled with twists. They provide excellent examples of Eve's leadership and authority, and the respect she has earned. Even so, it is not a perfect book.  There were opportunities for danger and suspense not taken, and the ending seemed too quick with a final scene a bit silly, albeit satisfying.

"Shadows in Death" is an excellent remedy to offset the stress and uncertainty of these times in which we live.

First Sentence:  Nigellus Cobmartin stood in the courtyard of his family home – its garden walls crumbling, its arched windows overlooking the tired and weedy garden with its dead flowers and gnarled trees – and sighed.

Crispin Guest's house is filled with his assistant Jack, his wife Isabel, and their many children, as well as the satisfaction of watching grow and providing training for Christopher Walcote, the son he can never acknowledge.  Into that tranquility comes John Rykener/Eleanor Cobmartin with an urgent summons.  In restoring the home he inherited, John's "husband's" workers uncover a body holding a precious relic. The body had been bound and sealed within a wall for 20 years.  It is up to Crispin to discover the killer while protecting the secret of John's true identity.

One can only appreciate when authors, particularly of historical mysteries, provide a section of "Notes About Characters," as well as a "Glossary."  The sections are not only helpful but interesting in themselves.

No one stays the same age forever.  Having characters who age, and whose life circumstances change, adds realism to the story, and much has changed for Westerson's characters.  Readers of the series will appreciate that, but even new readers are given a sense of how time has progressed.

Westerson has a wonderful voice.  Her dialogue is reflective of the period without being mired in it.  She writes with a balance of humor and drama.  It is interesting to see how, even in this period, forensic evidence was taken into account—"But it looks as if someone coshed him good.  Aye, look at the wood of the uprights here.  If he was still awake, there would have been scratches and scuffs from a struggle."  One issue, however, is the frequent use of Latin phrases.  While is it very appropriate to the period, an immediate translation of each phrase, as is often done by other authors, would not have been amiss.  Still, there are lines which make one smile—"Sometimes, Jack, the Church, in all its wisdom, is lacking when it comes to compassion."

The relationships are enjoyable and add dimension yet don't overtake the plot.  They provide richness and emotion.  One becomes attached to the characters. There are times where one might question whether Crispin is too modern; too good, too noble.  Yet, it is part of the development one has seen in the character and is part of what draws one back to the series.

"Spiteful Bones" presents an effective twist and an exciting climax.  Historical mystery devotees will be pleased.