Although Fall officially starts in September but, for me, Halloween is the real indicator.  Autumn leaves, cool nights, pumpkins, Indian corn, corn candy and Halloween reading.  Okay, I'll admit I'm a wimp when it comes to scary/creepy.  Perhaps it comes from living alone, or from having paranormal encounters, but I still believe there could be monsters in the closet.

That said, I do still like books with that slightly creepy, might-be-possible paranormal element to them.  So here's my list of un-traditional Halloween reading, in no particular order. 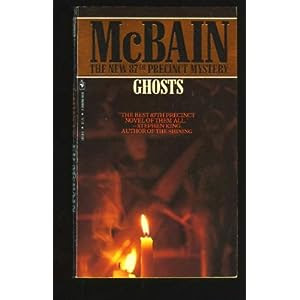 GHOSTS by Ed McBain
I love books by McBain, particularly his early books.  It amazes me how he can create fully-developed characters, have multiple story lines and write an excellent police procedural in under 200 pages.  In "Ghosts" McBain gives us a double murder, a doppelganger psychic/medium, a blizzard and the ghost of a child.  I first read it many years ago and have never forgotten it. 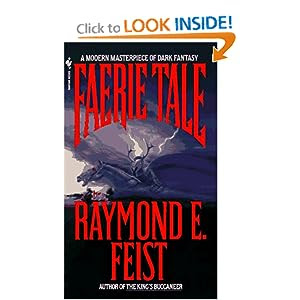 FAERIE TALE by Raymond E. Feist
Although Feist is considered a SciFi author, I love this book and read it every year or so. However, this is not your child's faerie tale even though it involves brotherly love and courage. It is fantasy; it is horror. It is creepy, dark, at times violent, at times sexual and always a page-turner. Those who love Celtic myth and Shakespeare will recognize magical elements of The Fool, elf-shot, Trooping Faeires, and more. It is one of those rare books that makes you feel as though it "could" be possible and causes even non-Catholics to wish for a vial of holy water, a silver sword and a true faerie stone.. Each time I read it, I find myself researching the legends and faerie folk involved, looking for erl-king hills and avoiding faeire rings at midnight on Midsummer's Night and All-Hallow's Eve. Next year, I'll remember to start earlier in the day so I'm not up until midnight finishing it. At least I wasn't in the woods. It's the blending of fantasy in contemporary life which, to me, makes this book so compelling, frightening and memorable.

THE MIDNIGHT ROAD by Tom Piccirilli
From the opening sentence, I found myself embroiled in Flynn's story.  Piccirilli's writing is lyrical, although a bit overblown.  He has an excellent ear for dialogue and knows when to use humor to provide a bit of balance to the dark.  This is an example where the weather becomes an essential element of the story, along with the talking dog.  The characters are eclectic and have violent histories.  I would have said this might not be my type of book, but instead, I found it a dark, intriguing, haunted and haunting book I couldn't put down.

A MINISTER'S GHOST by Phillip DePoy
This is the third book in DePoy's "Fever Devilin" series, which I love.  Set in the Georgia Appalachians, Devlin is a folklorist.  There is a paranormal aspect to each of the books in the series, but this was the one which was the most chills-up-the-spine scary.

HAUNTED BALLAD SERIES by Deborah Grabien
There are now five books in this series of which I've read the first three:
- The Weaver and the Factory Maid (2003)
- The Famous Flower of Serving Men (2004)
- Matty Groves (2005)
The title and plot of each book relates to an old English ballad with the protagonists being folk musicians.  I found the books quite well done and each book somewhat creepier than the last.

THE SHADOWY HORSES by Susanna Kearsley


Archaeologist Verity Grey's book believes he has finally found the location of the lost Ninth Roman Legion in Scotland because of a local boy who claims he's seen the ghost of a Roman soldier walking in the fields.  I'm sorry I don't have my review of this; I must re-read it.  I do remember it is one of my favorite books by Kearsley, and that's saying something.

There are others, of course.  I really liked Lillian Stewart Carl's books "Ashes to Ashes," "Dust to Dust," "Time Enough to Die," and "Lucifer's Crown."  None of these are particularly creepy/scary but they do use ghosts in an effective manner.  Then there are those series I read that are more paranormal/fantasy:
- Jim Butcher - Dresden series
- Simon R. Green - "Nightside" series
- Laurell K. Hamilton - Anita Blake series up through "Blue Moon" after which she lost me
- Charlaine Harris - Sookie Stackhouse series

I also want to include my favorite Halloween movie: PRACTICAL MAGIC  with Sandra Bullock, Nicole Kidman and Aidan Quinn.

So there you are.  I know there are a lot of books I've forgotten.  Please let me know your personal favorites.

In the words of the old Scottish prayer:


From ghoulies and ghosties
And long-leggedy beasties
And things that go bump in the night,
Good Lord, deliver us!
Happy Halloween and happy reading,
LJ

Excuse me...What are you reading? 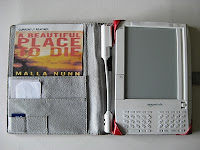 This morning, while waiting for a friend and reading my Kindle, I was reminded that there is one major downside to e-readers— you can not see what others are reading.  If you’re an avid reader, such as I, this is very annoying.

I like to know what others are reading.  If it’s a book of which I’ve heard, I may even ask them how they like it.  Intrusive, I know, but there you are.

I love and understand the importance of marketing (I am looking for a job).  I also believe there are no problems, only solutions waiting to be found.  So, in my own, humble, personal way, I decided to launch a “Show-others-what-you’re-reading” campaign.

I have the original Kindle in a case from M-Edge with an inside pocket.  I downloaded an image of the book’s cover into “Paint”, copied it into Word and re-sized it so it would fit on a sheet of paper inserted into the inside pocket of my Kindle case with a notation at the top of “CURRENTLY READING.”  With a looped strip of tape on the back at the top, the sheet will remain upright.   As I always read with the cover folded back, the sheet will always remain visible.

My vow is to do this for each book I read on my Kindle, and I invite others to join my campaign.  If you have an e-reader, find a way to display your current read to others.  Promote that book you are reading and encourage others to do the same.

Is this a perfect solution?  No.  However, it is fun and may prompt other e-book readers to follow suit. Perhaps publishers/authors will issue cards to slip into various e-reader cases.  Perhaps authors will make up cards to hand out at signings.  I know it's challenging as each e-reader cover is different.  But don't let that stop you.  Who knows where this may go?   Just remember, I thought of it first (as far as I know).