Share a Square - With our hands and our hearts, we can give to others 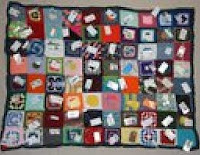 It began on June 14, 2007.  Shelly Kneupper Tucker saw a picture of a quilt, made by a volunteer that had been given to a young boy at cancer camp.  Shelly isn’t a quilter, but loved the idea of making blankets children attending Camp Sanguinity in Fort Worth, Texas, one of the Camp Quality facilities for children with cancer.  On her blog site, Shelly put out the call to others for 6” x 6” crocheted squares that she would make into blankets. Her goal was to make 140 afghans, which meant she needed 6,720 squares.

Did she reach her goal?  By June 22, she received her first square from a woman in Idaho, and responses from others in Canada, Taiwan, Australia, the UK, Spain and throughout the US, all saying they wanted to help.  Almost a year later, she had received more than 10,000 squares from people around the world.  Fast forward to 2011 and the program has grown to providing 150 afghans for the 4-to-16-year-old children, each year rotating delivery to three of the 12 Camp Quality locations.

My grandmother instilled in me the belief that “idle hands and an idle mind are the Devil’s playground” so I can’t simply sit and watch television.  I hadn’t done crochet since my early 20’s but decided last year that it was time to beginning again.  Okay, yes, it was embarrassing that I could remember how to make a chain and the various stitches, but not how to attach the yarn to the hook.  Once my knitting friend showed me, I was off.  I made lots of scarves, hats, and even a couple blankets but then realized there was really nothing else I needed and found myself wondering what else could I do?

Needs aligned—I found Share a Square.  Perfect!  I signed up on May 4th.  The first 50 squares worked up quickly and by June 20th had achieved my goal of making the 150 square maximum allowed per person for each year.   They will be shipped off to Shelly in early August.  I am blessed that I have not been personally touched by cancer, but friends, and the families of friends, have been.  I love the idea of having one of my squares in each afghan given to a child with cancer to make their days just a little brighter and more comfortable.

Each afghan is made up of 80 squares with a personalized tag attached to each square from the 80 different crocheters whose squares are included in that particular quilt.  The kids love seeing all the people and places who contributed to their unique afghan.

Would you like to join us?  The point of this blog is not to think I’m great for having made the squares, but to show that with our hands and our heart, we can give to others in our own way.  Shelly has made it incredibly easy.  Following is a list of links where you’ll find lots of information about Share and Square and Camp Quality, along with pictures of completed blankets and the children whose hearts and bodies they will warm.