Ansel Adams is best known for his sweeping landscapes photographed in black and white with sharp contrasts and deep black shadows.  Two of his favorite subjects were Yosemite National Park and the Grand Canyon.

The photograph on the left was taken by Ansel Adams.  The photograph on the right is one taken by me.  Both were taken at the Grand Canyon.  Mine was originally in color but, thanks to PicMonkey, has been color adjusted to black and white, with the contrast sharpened.  Not too bad, I don't think.

Adams photographed other subject, as well.  However, I don't find he photographed cemeteries.  However, I had the photograph of this angel guarding a mausoleum at Mountain view cemetery in Oakland.  She reminded me that, although we each have wounds or scars, visible or invisible, we persevere.  We continue on and learn to fly again even if our style may be awkward and our path a bit lopsided. 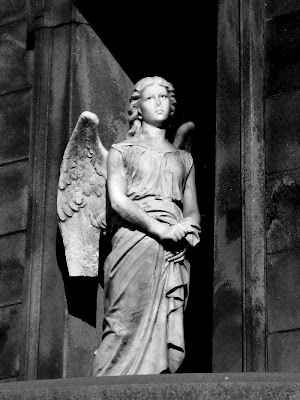