A Killer's Wife by Victor Methos 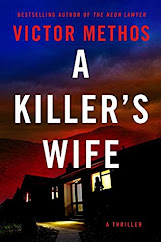 Some time ago, I gave up writing negative reviews of books as it was just too frustrating.  But now and then, there is a book that really needs to be addressed.

I have read two of Victor Methos' standalone legal mysteries and loved them.  In fact, I started to bore people by talking about and recommending them.  Therefore, writing this is painful in the extreme.

My first issue was the constant referral of the protagonist by her surname.  I recognize there are some professions where that is common, regardless of gender.  However, a friend and I, who share the same first name, are the only ones I've known to do this is real life. Even Donna Leon makes the distinction of referring to her character as "Brunetti" when he is at work, and "Guido" when he's at home.

Second, the troubled, incredibly bright teenaged daughter.  What kind of mother would hold her child back from being able to realize her full potential?  Red flags immediately were raised as to the purpose of this.

Third, when the police, who were comically incompetent, and who had already withheld information from her, came and asked for her help with her serial-killer ex-husband, any sane, reasonable person who had been through such an experience, would have told them to do their own damn jobs and get out.  Instead--I know it was the basis for the plot--she agrees.  Then, when they tell her not to enter the crime scene, she does the classic TSTL move and enters the crime scene. Jessica, for someone who was supposed to be so incredibly successful prosecutor, was painfully dumb.

Fourth, the too-good-to-be-true boyfriend.  Red flags screamed at that.

About one-quarter into the book, there was no question where the plot was going, and it isn't that long of a book.  The end was so clearly broadcast that I broke my cardinal rule and went to the end of the book, only to find I was 100%, bang-on correct.

"A Killer's Wife" was an absolute wall-banger for me.  Even more frustrating was that I couldn't actually, physically throw it across the room because it was an e-galley and I wasn't willing to sacrifice my Kindle.  I'm not completely giving up on Mr. Methos.  I'd be happy to read another of his standalone legal thrillers which, I repeat, I found to be excellent, but I shall stay away from his dysfunctional female protagonists.