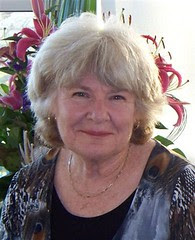 In February 2010, Wendy Laharnar contacted me asking whether I'd like to provide a book review to her international, subscription e-newsletter, "Calamity's Corner." It's almost one year later and I have been delighted to be a monthly contributor.  In turn, I thought it would be interesting to hear from Wendy.  Thank you, Wendy.

Thank you for the opportunity to be a guest blogger, L.J. From the wonderful book reviews you present each month in Calamity's Corner, I know you are a serious mystery buff. I did try to keep the emphasis on 'Mystery', but . . .

As an Aussie, I admire the work of my fellow Australian writers who have a talent for mystery writing: Laurel Lamperd, Murder Among the Roses, a cosy set in Western Australia. Carole Sutton, Ferryman; And the Devil Laughed; Blood Opal. Carole sets her crime novels in Cornwall UK. But I also enjoyed the Romance novels of Margaret Tanner, Frontier Wife and Anne Whitfield's Broken Hero, and Rosalie Skinner's futuristic fantasy, Exiled: Autumn's Peril, has the same holding power as a gripping mystery. I am unashamedly biased and in awe of my friends' talents.

Australian Jon Cleary, at 86 is onto his 50th novel (has sold 8 million copies). He is above par with his series of police procedurals featuring Scobie Malone. Of the other Australian authors who come to mind, I'd like to mention Kim Wilkins. Her historical fantasy, Rosa and the Veil of Gold is a favourite of mine. This one explores the legendary mystery of the ancient Russian bear. Makus Zusak (The Book Thief) is brilliant, but he is family orientated rather than a mystery solver.

When I think 'Mystery', I think of Britain's Agatha Christie. She has always had universal appeal. Because of her, I grew to love reading. I'm glad I read most of her books before I started on contemporary authors, though, because now when I re read hers, I feel a little disappointed in her antiquated writing style, but never in her stories. I love Dick Francis' mysteries, too, which all concern some aspect of horse racing.

I tend to get 'Mystery' and 'Thriller' confused. The American Tami Hoag kept me reading long into the night with Kill the Messenger so I went back for Still Waters. I like the guesswork, the complicated relationships and the touch of romance she provides and I plan to read her Dust to Dust. Her sentence structure with clever use of simile is well worth studying. I'm surprised that her genre is labelled 'Thriller'. That is what I'd attribute to Sarah Rayne's books.

Born in the UK, Sarah Rayne writes psychological thrillers. I agree with the accolades on her website: 'superb story telling skills'; 'sustained suspense'; 'unpredictable twists'; 'Unputdownable'. I read her Tower of Silence and Spider Light both very clever and 'extremely dark and disturbing'. She is a writer well worth studying, word for word, if one wants to polish his or her own writing skills, but I can't read any more of her novels. To me, life is too short to spend leisure time with such horror. It's unhealthy for one's own psyche. Call me naive, but that's why I don't read Stephen King.

American, Thomas Perry's eighteenth novel, Fidelity is more to my liking because this mystery is woven in a web of deceit and unravelled by an unwittingly potential victim in a race against time, in interesting settings. I'll definitely seek out more of his books.

Because I can't recommend a longer list of Australian mystery writers, I contacted some of my Australian reading and writing friends and asked them to share their favourite authors here, with an emphasis on 'Mystery'.

My cousin Sheryl said: These authors aren't Australian, they're American, but I like:
1) David Baldacci's 'Camel Club series'. I have read the first four (The Camel Club; The Collectors; Stone Cold and Divine Justice) and enjoyed each of them very much. I'm looking forward to the fifth one, Hell's Corner. The stories are about a group of four people who discover conspiracies and scandals inside the government.
2) James Patterson's Alex Cross series. Alex Cross is a black criminal-psychologist-come-policeman who manages to solve all sorts of gruesome crimes. I think the movie Along Came a Spider and a couple of others are based on those books. Patterson holds the New York Times record for the most 'Hardcover Fiction bestselling titles by a single author' (56 total) and his books have sold an estimated 170 million copies worldwide.

Rosalie Skinner, author of the upcoming fantasy series, The Chronicles of Caleath, says: When asked if as an Australian Author I read Australian stories, I have to say, I don’t think I discriminate. If the writing is good enough to turn off my internal editor and they tell the story well, I keep turning pages. However, I do have a few favourite Aussie mystery authors who spring to mind. Michael Robotham has a certain knack. He tells a great story. Back in the day there was Tony Kendrick’s A Tough One to Lose. For Fantasy authors I must mention our Aussie, Lian Hearn and her Tales of the Otori series. Other than that John Marsden and his Tomorrow when the War Began series are terrific stories. Most of the children's books I choose for my grandchildren are by Australian authors with Australian themes. They are beautifully illustrated and great stories.

When asked if she sticks to Australian authors, Australian Crime writer, Carole Sutton, answered: To stick to only one country’s books is to deny yourself a large proportion of a royal feast of world wide literature. My favoured genre for both reading and writing is crime fiction/murder mystery. British authors such as Val McDermid, Lynda La Plante, Reginald Hill, Minnette Walters have always been high on my 'to read' list. I’m also a follower of British crime TV series and particularly like the characters who work in Cornwall UK, like, ‘Wycliffe’ based on W J Burley’s novels, and ‘Inspector Lynley’ from Elizabeth George’s books. Having lived in Cornwall for 20 years I like to set my own crime books in that familiar location. Although she is not into the mystery genre, I also like reading Maeve Binchy who inspires me with the way she breathes life into her characters in so few words. As for Australian authors, a new crime writer, Felicity Young, has a delightful series out with her Detective Sergeant Stevie Hooper books. Tim Winton is slowly growing on me, though I enjoy blockbusters like Judy Nunn, Bryce Courtney and Colleen McCullough more.

I think Carole sums up my view perfectly. Aussie readers enjoy "a royal feast of world wide literature" including our own.

Biography:  Wendy lives on the east coast of Australia with her husband and their Mini Schnauzer, Spitzli.  When she's not writing, she reads and sews and enjoys time shared with her grownup family. Myths, legends and the medieval world fascinate her, and she draws from these in her writng. Her novel The Unhewn Stone redefines the Wilhelm Tell legend. It is her dream to follow Ovid and create a new, universal legend, one day.
Posted by LJ Roberts at 11:26 AM