Another forey into antique shopping, but this time at the Hillsborough Antiques Show with my friends Priscialla and Scott.  Scott didn't think this Ansonia & Co. figural clock with Shakespeare's Hamlet was that heavy until we were only half-way though the back building and still had another building to cross before even getting to the parting lot.  Believe me, it is heavy!

Day 7 - Something You Wore:

My trusty throw-on-and-go fleece rhuana with all DorothyL, 4MA, ASPCA and Stitches West pins along with a scarf I'd crocheted.  What you can't really see is that the scarf has a silver metallic thread running through it that makes it sparkle wonderfully in the light.

I had always wanted to do stained glass.  This was my second project and I love it.  Unfortunately, I soon discovered that (1) it is very expensive to do and (2) I wanted to make large windows.  Being an apartment dweller, that's not really practical, so this was also my last project. 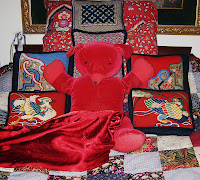 Red is such a major color throughout my apartment and my wardrobe, it wasn't a matter of finding something red to photograph, it was a matter of deciding which things to photograph.  Here is Teddy Bear, whom I've had since I was 5 years old, resting among some of the needlepoint pillows I've made, along with my red satin nightshirt.

I was feeling a bit stimyed on this one until I heard that annoying "beep...beep...beep..." that large vehicles make when backing up.  As I had an errand to run anyway, I grabbed the camera, drove to the end of the street and, sure enough, there it was.
Posted by LJ Roberts at 4:07 PM