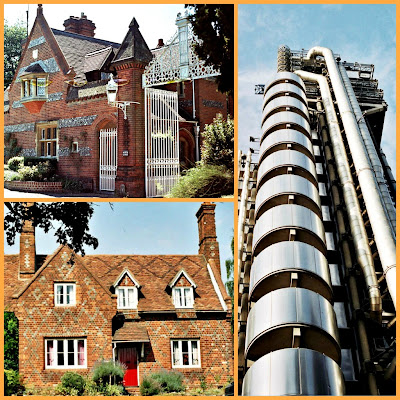 It was impossible to resist returning to the UK for pictures of buildings.  Courtesy of Oracle, I spent not quite a week there a few years ago.  The office was in Reading, but I stayed in the lovely village of Sonning-on-Thames during the week.  An interesting note is the this is the village in which General Eisenhower stayed before D-Day.  On Friday, after work, I shifted into London and was there until mid-day Sunday.

Working clock-wise from the right, that incredibly modern, industrial-looking structure is the world headquarters for Lloyd's of London on Lime Street.  When you consider Lloyd's began in 1688, this building a certainly a departure from its beginnings.  It actually stands on the site of the old Roman Forum.

Bottom left is the Red House in Sonning-on-Thames, the town in which I stayed during the week.  It was built in the 1600s and was recently available for rent at a mere £4,000/month.  What most attracted me was certainly not the dreadful pink curtains, but the wonderful patterning of the brick and tile work.  Plus, I love a red door.

Upper left is the house, also in Sonning-on-Thames, which nearly incited me to become the worst of an ugly American.  Between the iron gates which opened to a field containing a few cattle one day, the contrasting brick and stone work and the Gothic door, I was fascinated.  I know really nothing about it except that the drive is the entrance to property where the Bishop's Palace once stood.  The Palace, which no longer exists, was built in the late 11th Century and was the residence for the Bishops of Salisbury.  But back to the house.

I knew the history of the grounds but could not, and still can't, find any information on the house.  It is a private residence, and does have a "private property" sign at the gate which I respected.  However, just after taking this photograph, the residents arrived home.  It took everything I had not to approach them, babble senselessly, and ask them about their house.  Aren't you proud of me for not embarrassing myself and our country?
Posted by LJ Roberts at 2:58 PM