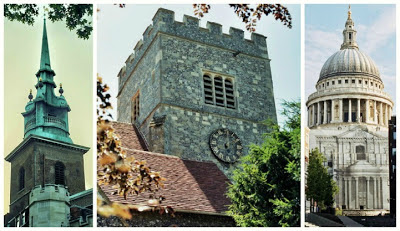 Traditional religion and I parted ways a long time ago.  However, I do love history and architecture.  So I chose these three as examples.

The spire-topped church on the left is All Hallow's Church - Founded in 675, it is the oldest church in London, and contains inside a 7th-century Saxon arch with recycled Roman tiles, the oldest surviving piece of church fabric in the city.  It is next to the Tower of London.  The church was built on the site of a former Roman building, traces of which have been discovered in the crypt.

The church in the center with the square tower is St. Andrews in Sonning-on-Thames.   In 909 AD, this became one of the two cathedrals of the Ramsbury and Sonning.  Some Saxon stonework can still be seen in the church today. The north aisle dates from the 13th century and the south aisle dates from the early 14th century. However, the church as it can be seen today is largely Victorian, with major restoration done in 1852–3 and 1876.

On the right is domed St. Paul's Cathedral.  Its dedication to Paul the Apostle dates back to the original church on this site, founded in AD 604.  The present church dating from the late 17th century was built to an English Baroque design of Sir Christopher Wren, as part of a major rebuilding program which took place in the city after the Great Fire of London,  and was completed within his lifetime. The cathedral is one of the most famous and most recognizable sights of London, with its dome, framed by the spires of Wren's City churches, dominating the skyline for 300 years.

Thank you, Wikipedia, for the fascinating information.